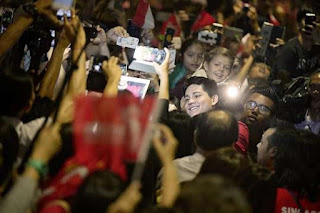 Joseph Schooling: Coping with life in the fast lane

Speed is Joseph Schooling's game. But even he has difficulty keeping pace with what has been a whirlwind week after That Win.

The world's fastest 100m butterfly swimmer ever in a textile suit told The Sunday Times last Thursday that the events of the past week had gone by in a blur - "crazy, like zero to hundred", was how he put it.

At that time, it had been just five days since his win at the Rio Olympics made him the first Singaporean to earn an Olympic gold medal.

Amid flying back home within 40 hours of his win, being honoured in Parliament, taking photographs with Cabinet ministers and meeting endless fans, sponsors and the media, Schooling hardly has had time to breathe, let alone take in what had happened.

"It hasn't sunk in yet. I couldn't fathom all this happening," says the 21-year-old during a rare quiet moment, ahead of a victory parade on an open-top bus.

"I just need to chill and have some time to myself to digest everything."

He admits he is unsure just how exactly the medal will change his life.

But what is certain is that it will change. Life will not be as simple as the one he had when he was a mere student at the University of Texas at Austin.

It is also unlikely that he will continue to be mobbed like he was every day when he was back in Singapore. Reality is likely to be somewhere in between - and also one in which he will forever be judged and reminded of that 50.39-second swim that changed his life.

A multiple SEA Games winner, an Asian Games champion, a Commonwealth Games and World Championships medallist, Schooling was already on the radar of world swimming prior to Rio.

But when you beat Michael Phelps and in an event the greatest Olympian had yet to lose in over a decade, you get noticed. You also get noticed when you beat not only Phelps, but also Chad le Clos and Laszlo Cseh - together three of the greatest butterfly specialists of all time - and relegate all of them to a joint second spot. The victory ceremony involving all four on the Olympic podium - a first in the history of the Olympics - is now immortalised in pictures and will forever be a reminder of the magnitude of what he achieved.

That Schooling did it in an Olympic record, in the third-fastest ever time known to man, puts him instantly among the sport's big names.

It is little wonder that he has become somewhat of an international star overnight. The following on his Facebook page has grown from 8,000 to 116,000.

On Instagram, his followers shot up from 25,000 to 150,000. English Premier League club Chelsea even got their star player Eden Hazard to send him a personal congratulatory video message - he had made known how he is a fan of the club.

The world's media has also taken notice, and not only of his swimming. British newspapers The Telegraph and Daily Mail ran a story of how a user on dating app Tinder claimed she was matched with Schooling before the Olympics.

She ignored him, only to find out later that her match became the man who beat Phelps.

Several online sites ran stories about his supposed love interest, American student Casey Shomaker, something Schooling has been coy about. He has been generally relaxed about the interest in his personal life. But he draws the line when online comments attack those who are close to him.

His long-time nanny and helper, Ms Yolanda Pascual, 56, was among those credited as having played a key role in his success. Ms Pascual, who has been looking after Schooling for the last 19 years, was subjected to online criticism, with some saying she was riding on his success.

He appeared on a Filipino news show, GMA News TV, to defend her.

Calling her his "second mum", he said: "I think whoever said that should be shot. That's stupid.

"That really pissed me off. That's not true at all."

Sergio Lopez, 48, who played a major role in Schooling's development, coaching the young swimmer at Bolles School from 2009 to 2014 and who is joining Auburn University's swimming and diving team as associate head coach, has some advice for his former charge.

The former Olympic bronze medallist in swimming said: "I told him not to be too trusting and to be careful with what he writes and the way he says things."

At least back home in Singapore, the attention, while intense, has not been vicious. In the last week, he has grown accustomed to screaming girls and doting aunties.

He even took it in his stride when strangers found out where he lived and made their way to his apartment, leaving everything from flowers to cups of Milo dinosaur outside his door.

Many have been impressed by how well-mannered and patient he has been with the adoring Singapore public. When he arrived at Changi Airport after a 30-hour journey, he spent over an hour taking pictures and signing autographs with fans.

On his victory parade, he was always smiling and greeted well-wishers with a "thank you, uncle; thank you, auntie" or "I love you guys".

But he realises that he might need help moving forward.

The Schoolings are looking at putting a team in place to manage his image as well as any potential commercial deals. Also on the cards is training on how to carry himself in interviews and in public.

And there's the swimming, of course. Training will have to be stepped up in the pool.

Under the stern gaze of Eddie Reese, his coach at the University of Texas, Schooling will make it his goal to break Phelps' 100m butterfly world record of 49.82 seconds, set seven years ago in a rubber suit that is now banned.

That, as well as taking on more events at the Tokyo 2020 Olympics, will be on the top of his list now that he has flown back to the United States for studies and training, and the familiar whiff of chlorine and the 5am alarm.

"I just need to stay focused and keep finding ways to get better. My goal is to be the best in the world and I train every day to put myself in that position." He continues: "I like having people chase me. I like being the fastest... I tried to make a statement with the other guys saying 'you (want) to catch me, you have to come and take it'."

As is often the case with those living life in the fast lane.

Sent from my iPhone
Posted by ChangCL's Site at 8:22 PM