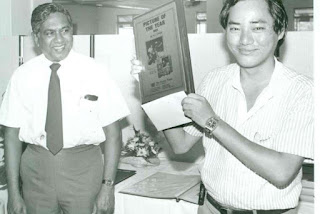 SINGAPORE - Clad in a white, short-sleeved shirt and dark pants, Mr S R Nathan was on a stroll in The Straits Times newsroom to get acquainted with his new workplace when a reporter stopped him and said: "Eh, can you get me the file?"

Without a word of protest, Mr Nathan, then 57, went and got the file of news clippings from the library for the reporter.

Days later, the reporter was mortified to discover that the modestly dressed man was his new big boss - the first senior civil servant-turned-executive chairman of The Straits Times Press group.

It was February 1982, a time when ministers made the public announcements and civil servants worked anonymously behind the scenes, rarely in the public eye.

But in quietly delivering the file, Mr Nathan made a powerful statement that he was a man of humility and would go out of his way to bridge the chasm between The Straits Times newsroom and the Government, said the company's former editor-in-chief Cheong Yip Seng.

Mr Cheong, then editor of The Straits Times, was in the vortex of the changes. He recalled relations between the newspapers and Government were at a low, following the People's Action Party's loss in the 1981 Anson by-election, after 25 years as the only party in the House.

Then-prime minister Lee Kuan Yew believed the editors could not control younger reporters, who desired more opposition in Parliament and wanted scoops above all.

The appointment of Mr Nathan, then permanent secretary of the Foreign Ministry, was a compromise accepted by senior editors to prevent other more hardline civil servants from taking over.

Some in the newsroom, however, did not see it that way. Buoyed by the resentment, a few reporters wore black arm bands in protest on Mr Nathan's first day in the newsroom, which was in the now-demolished Times House in Kim Seng Road.

But Mr Nathan did not take umbrage, said Mr Cheong.

Neither did he behave, as feared, like a government censor scrutinising the daily line-up of news stories, killing or changing reporters' stories.

"He went out of his way in the early days to show he was not there to do a hatchet job," said Mr Cheong. "His agenda was to build bridges.''

Over time, his actions won over the newsroom, said Mr Cheong.

The reporters, he added, could see their new executive chairman did not correct stories, nor call up editors to order them to change stories or tell reporters what to do.

He also went out of his way to help journalists develop their skills, said Mr Cheong.

Mr Nathan talked regularly to younger reporters to get a sense of how they felt and with editors, he had "coffeebreak'' meetings in the evenings to discuss hot-button issues and policies.

He wanted the Government to understand how the newsroom operated, and that editors were not out to undermine it.

Mr Nathan also knew some senior editors, including editor-in-chief Peter Lim, from the time he was in the National Trades Union Congress between 1962 and 1966. As head of its Labour Research Unit, he helped the unionised reporters negotiate for better pay and work conditions from the management.

Mr Cheong said he got to know Mr Nathan better while covering ministerial trips abroad and later, from the regular briefings on foreign affairs he would hold for editors.

These efforts narrowed the gulf between the editors and the Government, so much so that some of Mr Nathan's former civil service colleagues told him he had "gone native".

He probably regarded it as a jibe but laughed it off, said Mr Cheong.

While he spent time and effort coaxing and convincing editors to consider the Government's view, he also defended them.

Mr Cheong recalled an episode when a minister was so enraged by a news story that he phoned and berated Mr Nathan.

"He later told us that he heard the minister, but because the minister was repeating the point, he put the phone down on the table and carried on working. In other words, he wasn't someone who would take a call from a minister and just roll over and play dead."

Mr Cheong credits him with convincing politicians to be more willing to hear reporters out and understand their side of the story.

Ministers whose portfolio included the media would, for example, stand up at Cabinet meetings, "to defend us because that minister would have gotten to us and found out what was our side of the story".

In earlier days, "the politicians would shoot first and ask questions later. They just conclude after reading a story that you are out to get them", said Mr Cheong.

He could recall only one instance when Mr Nathan intervened directly in a story: when The Straits Times interviewed Vietnamese then-foreign minister Nguyen Co Thach during his visit here in July 1982, when Vietnam was occupying Cambodia.

Mr Nathan thought the story was slanted against Singapore, and wanted Singapore's side of the story, recounted Mr Cheong, adding that Mr Nathan had never spiked a story.

By the time he left in April 1988 to be high commissioner to Malaysia, he had helped both sides understand each other better - "that is Mr Nathan's chief contribution".

And the measure of his success in the newsroom? "Many who originally opposed his coming were very sorry to see him go, because they could see he had done an awful lot for the newspaper," said Mr Cheong.

Sent from my iPhone
Posted by ChangCL's Site at 4:22 PM