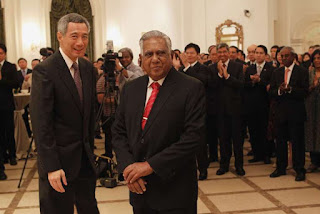 SINGAPORE - In his eulogy at the state funeral of late former president S R Nathan on Friday(Aug 26) afternoon, Prime Minister Lee Hsien Loong paid tribute to a man who, time and again, put the nation above self and played an important role in Singapore's nation-building.

"As one of the pioneer generation who lived through Singapore's most tumultuous period, Mr Nathan witnessed many of the key events that shaped our nation. He not only had a front-row seat, but was often an actor on stage," said Mr Lee.

He said four things come to mind when thinking of Mr Nathan: He was a man who lived life to the fullest; he faced challenges with resolve, never giving up; he always did his best for Singapore, "even at personal risk and sacrifice"; and he had "great personal integrity and commitment".

The one incident that epitomises Mr Nathan's qualities is the 1974 Laju hostage incident, said Mr Lee. Terrorists had hijacked the Laju ferry between Bukom and mainland Singapore, but the Government negotiated a deal with them to release the hostages in exchange for safe passage to the Middle East.

Mr Nathan, then director of the Security and Intelligence Division, "risked his life" to lead a team of 13 officials who accompanied the terrorists to Kuwait - serving, in effect, as hostages.

"Not many of today's generation know of the Laju incident. Those who do probably do not fully appreciate the magnitude of the decision that Mr Nathan and the other 12 made," said Mr Lee. "It took great moral and physical courage."

In his speech, Mr Lee gave an overview of Mr Nathan's wide-ranging career, and how it illustrated his repeated willingness to serve.

After Mr Nathan retired from Government in 1982, he was asked to be executive chairman of The Straits Times, and managed to win over the suspicious journalists with his sincerity.

In 1988, he became High Commissioner to Malaysia. He was later posted to Washington, and was Ambassador in 1994 when Singapore sentenced United States citizen Michael Fay to caning for vandalism, sparking a US media campaign against the caning.

"Singapore needed to get our point of view across. Mr Nathan went on the talk show Larry King Live. He was grilled, but defended our position with conviction, and persuaded quite a few Americans that what Singapore was doing was not wrong," recalled Mr Lee.

When Mr Nathan returned from Washington in 1996, he established the Institute of Defence and Strategic Studies, now the S. Rajaratnam School of International Studies.

"Mr Nathan could have retired from public service into a more placid life in academia," noted Mr Lee.

"But duty called again. Once again he put country before self."

In 1999, Mr Nathan stood for President and was elected.

Mr Nathan served his two terms as President with "dignity and distinction", winning the respect and affection of Singaporeans of all races and walks of life; a gracious host to foreign visitors at home, and representing Singapore overseas with aplomb.

He also started the annual President's Challenge campaign to help the less fortunate, which raised more than $100 million over 12 years and reminded Singaporeans that everyone has "a part in building a compassionate society".

And he gave good advice to Mr Lee when the two worked together as President and Prime Minister for seven years. When the 2008 global financial crisis hit, Mr Lee sought Mr Nathan's permission to draw $5 billion from the reserves to fund economic measures, and to back a guarantee of all bank deposits in Singapore with $150 billion of the reserves.

After careful consideration, Mr Nathan approved the Government's request, allowing the crisis to be dealt with decisively and for Singapore to emerge largely unscathed.

"Mr Nathan proved once again that he was capable of making tough decisions when the need arose."

Even after Mr Nathan retired, he stayed active. He shared his wisdom and experience with the young and kept up with current affairs and old friends.

Mr Lee himself kept in touch with Mr Nathan regularly. Mr Nathan would sometimes join him for lunch at the Istana; when Mr Lee saw an article that might interest Mr Nathan, he would send it along.

"He made it a point always to reply, in his beautiful hand which remained steady all his life," said Mr Lee, recounting how Mr Nathan wrote a four-page letter to him recently, to pass on a message from a friend.

"I thought how lucky he was, to be so active and focused at 92."

Mr Nathan's life holds many lessons for Singapore, said Mr Lee. Mr Nathan himself had hoped that Singaporeans, especially the young, would draw a key lesson from his memoirs: not to give up.

"It is a precept that Mr Nathan lived by", observed Mr Lee: overcoming the trying circumstances of his childhood to rise in the public service through grit and ability, guided by a sense of duty.

"He put heart and soul into every task assigned him, including the highest office in the land," concluded Mr Lee. "Time and again, he placed nation before self. Quietly and without fuss, he gave his best years and more, to Singapore.

"It is with great sorrow today that we bid farewell to one of Singapore's greatest sons."

Sent from my iPhone
Posted by ChangCL's Site at 2:38 AM