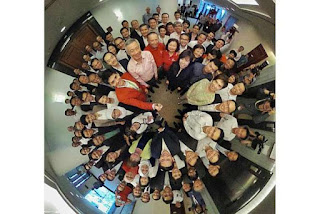 SINGAPORE - Singapore swimmer Joseph Schooling was formally congratulated in Parliament on Monday (Aug 15), capping off a whirlwind day which started with him being received by hundreds of adoring fans in Changi Airport, to receiving news that his national service deferment had been extended.

Prime Minister Lee Hsien Loong had said in a Facebook post on Saturday that Parliament would move a motion to congratulate Schooling on his gold medal win, and to express support for Singapore athletes competing in Rio.

Schooling and his parents, Colin and May, were present in Parliament.

The Schoolings at Parliament House, where a motion was moved to congratulate @joschooling for his #Olympic #gold

Minister for Social and Family Development Tan Chuan-Jin, who moved the motion in Parliament, said Schooling's achievement marks "a milestone in Singapore's sporting history and a new beginning".

The historic win exemplifies the Singapore spirit, he said, adding "our never-say-die attitude, and our determination to preserve and succeed against tough odds".

The Olympic gold is significant, as it represents the first step in Singapore's journey towards the next 50 years, he added.

Ms Lim paid tribute to Schooling's parents for not asking their son to take the more conventional path of success. Behind what happened to be an effortless win must be a lifetime of sacrifice and hard work, she said.

At the end of the speeches, members in the House gave a 30-second standing ovation to Schooling.

It was the first time that such a motion had been moved. A motion is a proposal for MPs to get something done or to express an opinion on a topic of interest.

Speaking to the media, Schooling said it was an honour to be the first sportsman to be given the honour and standing ovation in Parliament.

"I think that was pretty cool for me and my family to have that honour and that chance for everyone to say the things that they said in front of us. It was cool, and I had goosebumps," he said.

Schooling, who is scheduled to go back to the US to continue his studies on Friday, revealed that he is trying to ask for permission from his school to stay longer so he could attend the National Day Rally on Sunday (Aug 21).

He is expected to hold a press conference on Tuesday (Aug 16).  An open-top bus victory ride is also planned.

He said he is also hoping to spend some time with his parents. Asked what was the first thing he did when he got home on Monday morning, he said with a smile: "I took a shower and went to bed."

Earlier on Monday, the Defence Ministry said Schooling would have his national service deferred till after the 2020 Olympic Games in Tokyo.

The announcement came mere hours after Schooling arrived from Rio de Janeiro, via Sao Paulo and Barcelona, where he was competing at the ongoing Olympics.

On Saturday (Aug 13), Schooling beat 23-time Olympic gold medallist Michael Phelps to clinch the 100m butterfly gold. His time of 50.39 seconds is an Olympic and Asian record. Phelps was joint-second alongside South Africa's Chad le Clos and Hungary's Laszlo Cseh with a time of 51.14sec.

The NS deferment will allow Schooling to continue training at the University of Texas in Austin, where he is currently studying, ahead of next year's World Championships and the Tokyo Olympics in 2020.

In Texas, he is coached by Eddie Reese, one of the most respected coaches in the US swimming scene. A three-time head coach of the US men's Olympic swimming team, Reese, 74, is also the most successful swimming coach in National Collegiate Athletic Association history, winning 12 team titles in 38 seasons with the Longhorns.

Schooling arrived in Singapore on Monday morning, where he was greeted by hundreds of fans at Changi Airport's Terminal 3. The supporters, many clad in Singapore scarves and waving Singapore flags, lined temporary barricades from Belt 42 to the arrival hall's exit.

Sent from my iPhone
Posted by ChangCL's Site at 6:11 AM