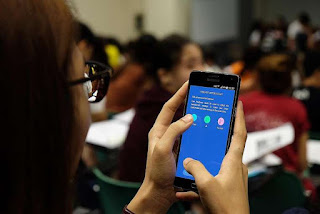 From next month, students at the Nanyang Technological University (NTU) can help reduce the university's electricity bills, simply by pushing a button on their phone.

An app called PowerZee, which will be rolled out in the campus, will let them give feedback on how hot or cold a specific room is. The data is used to adjust the air-conditioning system in real time, reducing unnecessary energy consumption.

They will also be able to tag places they consider green, and get tips on how to be more eco-friendly.

The project, done in collaboration with French utility firm Engie, is among 20 joint projects with the private sector that have been tested at NTU since 2014, aimed at improving energy efficiency. Four more are in the pipeline.

The university is on a mission to cut its energy consumption by 35 per cent by 2020. According to a sustainability report released by NTU to Today newspaper, it has decreased its energy usage by 10 per cent since 2011 despite the campus growing in area by 9 per cent in the same period.

It is the first university here to have a report which takes stock of the institution's green efforts.

Since 2011, it has saved over 20 gigawatt hours of energy, enough to power 4,500 four-room Housing Board flats for a year.

Citing space constraints as a limiting factor in switching to renewable energy resources, Professor Subodh Mhaisalkar, executive director of the Energy Research Institute @ NTU, said: "What you can save from energy efficiency, in the context of Singapore, far outweighs what you can save through solar photovoltaic systems, for example."

He noted that the return of investment for solar energy is about seven years, but that most energy efficiency measures can pay for themselves in three years.

The app will play a part to further this reduction, with a pilot run conducted on 2,000 students showing that it could reduce overall energy consumption by 5 per cent.

So far, the university has reduced its burden on the grid through several large-scale initiatives, including the installation of solar photovoltaic systems on a majority of its rooftops and using light-emitting diode (LED) lights along its streets.

The solar photovoltaic systems, which convert sunlight into energy, have a peak capacity of 5 megawatts in total, and are able to save NTU up to 3 per cent in energy costs and reduce its carbon emissions by 3,000 tonnes of carbon dioxide annually.

Switching all its street lighting to LED bulbs has also saved the university $60,000 per year in electricity bills.

It will roll out smart LED systems equipped with sensors, which turn on when they detect motion, across the campus by the end of the year.

This year, it will be embarking on four new projects, including a one-year trial of a film that can be pasted on windows to reduce the amount of ultraviolet light that enters a room and, thus, the energy needed to keep the room cool.

Two buses that run on electricity will also go on trial with two charging stations by the end of the year.

In using the university as a giant test bed, new technology gets out of the laboratory and into the real world faster, said Professor Alexander Zehnder, chair of NTU's Sustainable Earth Office.

Real demonstration on larger scales is essential, and "bringing together the private sector and academia at an early stage increases the success rate for new technologies", he said. The PowerZee, for example, will be rolled out at a Paris university next month, and tested at Ngee Ann Polytechnic soon.

Sustainability goes beyond saving energy, he noted. "It actually encompasses and safeguards our lives now, and in the future."

Sent from my iPad(Air)
Posted by ChangCL's Site at 1:54 AM