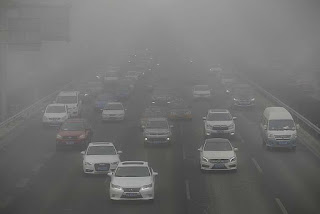 The concentration of PM2.5 - the small particles that pose the greatest risk to human health - hit 161 micrograms per cubic m in the morning, according to a US Embassy pollution monitor. That is more than six times the World Health Organisation's recommended maximum day-long exposure limit of 25.

The warning came after the city issued a yellow alert against heavy air pollution from yesterday to tomorrow, the local environmental bureau said on its official Weibo social media account.

Air quality may gradually improve around noon tomorrow, the agency forecast. A yellow alert is the third-highest level on Beijing's four-tier warning scale.

The return of smog to Beijing underscores the need for tougher measures to help clear the skies. The city's annual average concentrations of PM2.5 dropped about 10 per cent last year compared with the previous year, although air quality fell short of government standards on 46 per cent of days last year.

Beijing will ban some high-emission vehicles from its urban areas starting today, the official news agency Xinhua reported on Monday, citing the authorities.

The city will also cut coal use by 30 per cent to seven million tonnes this year from a year earlier, Mr Fang was cited as saying.

And the Ministry of Environmental Protection has ordered 20 cities surrounding Beijing whose smog is exacerbating chronic pollution in the capital city to implement coordinated air pollution controls.

Concerned about the damage done to its reputation by persistent smog, the Beijing municipal government last month promised it would take "extraordinary" measures this year to curb emissions from coal consumption and cars.

Vehicles that fail to meet China's Emission Standard III will not be allowed to enter Beijing's main districts on weekdays, and drivers will be fined if they fail to comply, Xinhua said. Beijing was one of 24 Chinese cities to issue a smog "red alert" at the end of last year, allowing the authorities to impose emergency restrictions on traffic and industrial output in order to reduce emissions. The 5.7 million vehicles on its roads account for 31 per cent of the city's hazardous PM2.5 particles, a major constituent of smog.

It is estimated that cars are responsible for over 80 per cent of the carbon monoxide in China's air.

China has drawn up new rules requiring all light vehicles to adhere by 2020 to its strictest "China VI" emission standards, which are based on those used in Europe and the US. New cars in Beijing will have to adhere to the China VI standards from this year.

Sent from my iPad(Air)
Posted by ChangCL's Site at 1:43 AM