Just 11 days into President Donald Trump's term, his administration has been hit by lawsuits, a rebellious acting attorney-general, and protesters on the streets.

In one evening, the United States President replaced both the Justice Department chief - an Obama appointee - and the head of Immigration and Customs Enforcement.

The turmoil is unlikely to stop, as Mr Trump is set to name his Supreme Court pick today. He is sure to nominate a conservative, whose appointment is likely to be fought by the Democratic Party.

The fallout of Mr Trump's executive order on immigration and refugees has been severe. But he and his chief strategist, Mr Steve Bannon, who, now with a seat on the National Security Council, seems to be consolidating his power in the White House, have their fingers on the pulse of his supporters.

The pro-Trump Fox News cited a Quinnipac University poll indicating that 48 per cent of people in the country approve of "suspending immigration from terror-prone regions, even if it means turning away refugees". 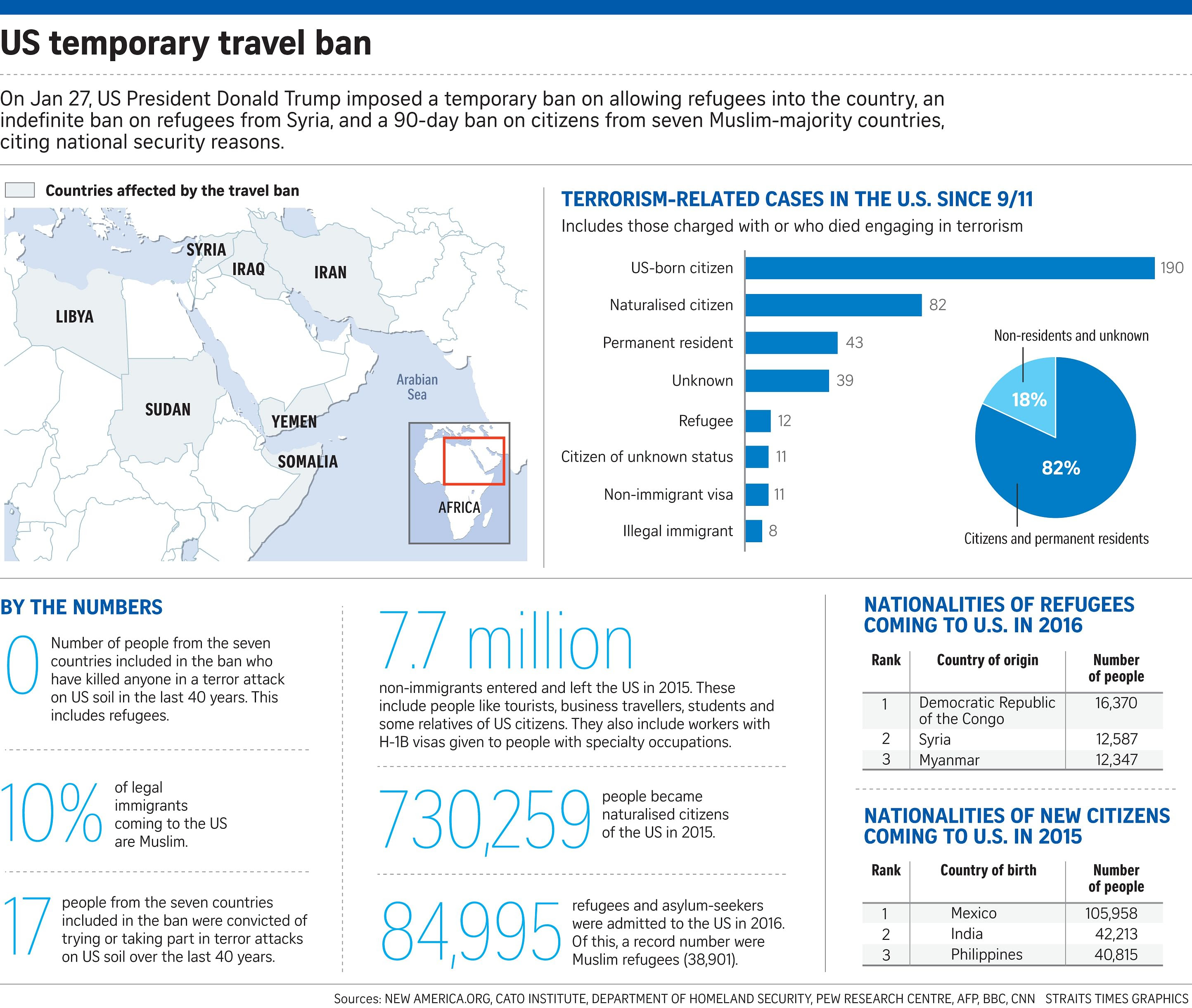 In an article widely cited by pro-Trump conservatives, Mr David French, a senior fellow at the conservative National Review Institute, contended that the "hysterical rhetoric" over the travel ban was "out of control".

"When we know our enemy is seeking to strike America and its allies through the refugee population, when we know they've succeeded in Europe, and when the administration has doubts about our ability to adequately vet the refugees we admit into this nation, a pause is again not just prudent but arguably necessary," he wrote.

Said Dr Zachary Abuza, who lectures at the National War College in Washington: "This will have negative security repercussions. In any policy, the question is how does it impact security, interests and values. This is one of those decisions that undermines all three.

"If it truly made the US safer, I think many people could stomach it. But there is no data to justify this. It plays into the narrative of the Islamic State in Iraq and Syria or Al-Qaeda. There is no way you can look at what they have done with a straight face and say it is not anti-Muslim."

US operations in the banned countries, especially Iraq, could be hampered as local translators would be unwilling to work for the US government if it could not be trusted to keep them safe, typically by offering them US visas, he argued.

Analysts and the media say the decision seemed to have been made by a small team, with no consultation with other government agencies, which resulted in confusion - and protests - when it was announced

Mr Michael Kugelman, a senior associate at the think-tank Woodrow Wilson Centre, believes Mr Bannon could be the person who wields the most power in the White House now.

"He seems to have the President's ear on just about everything, and he appears to have a seat at the table for any and all important discussions on policy," he said.

Sent from my iPhone
Posted by ChangCL's Site at 6:02 AM