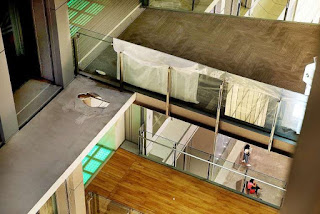 A 17-year-old climbed over the railing on the fourth-storey linkway between Orchard Central and Orchard Gateway yesterday afternoon and placed his feet on a ledge outside.

It collapsed under his weight, sending him crashing to the ground. The teenager was taken to hospital, where he died.

The Straits Times understands that the teenager, believed to be Jonathan Chow Hua Guang, was taking a photograph along the bridge when his phone fell onto a ledge.

He then "vaulted" across the 1.2m railing in an apparent effort to retrieve it.

The ledge was made of plaster board and not meant to bear a load. It collapsed when he set foot on it.

An eyewitness, who works in a clothing shop on the fourth floor, said he had walked past the boy and a teenage girl moments before the incident at around 4pm.

Mr Garion Key, 23, said: "I had already passed the linkway when I noticed he had climbed over the railing. That is when I heard a bump.

"My friend and I ran back and looked over and saw him lying on the ground below."

Mr Key said the girl ran past them in a panic and went down the escalators to check on her friend.

Another witness, Ms Ching Wan Ting, 24, a manager in training, was standing near her shop front when the incident took place. She said: "My first reaction was to call the ambulance, but after that, the trauma of seeing such an incident set in."

Some passers-by stopped to help and one started administering cardiopulmonary resuscitation (CPR) on the teenager.

When The Straits Times visited the scene yesterday evening, there was a hole in the ledge beside the fourth-floor walkway linking the malls in Orchard Road.

The Singapore Civil Defence Force (SCDF) was alerted to the incident at 4.05pm, and the boy was taken to Tan Tock Seng Hospital. Paramedics administered CPR en route to the hospital, SCDF said.

He later died in hospital.

"This afternoon, a member of the public vaulted the railing of the level-four link bridge between Orchard Central and Orchard Gateway onto a ledge and subsequently fell to the atrium," said Ms Mavis Seow, chief executive of Far East Organization's retail business group, which owns Orchard Central.

"He was rushed to the hospital. We are deeply saddened by the tragic incident and our thoughts and prayers are with the family. We are cooperating with the authorities in their investigations."

Sent from my iPhone
Posted by ChangCL's Site at 11:25 PM