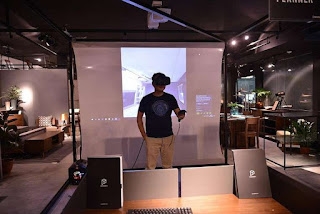 More companies see VR as the way to move forward

Leading trainee divers in underwater outings among exotic corals, without getting them wet.

Allowing furniture shoppers to swop new sofas for the best fit, without any heavy lifting.

These are some of the ways that virtual reality, or VR, is picking up steam among enterprises and companies in Singapore, as businesses start to see the technology as not just a gimmick, but also as a tool for training, marketing and reaching out to customers.

Local virtual-reality start-up Hiverlab, for example, recently completed a VR diving simulation prototype which can be used to train divers, such as volunteer citizen scientists or marine biologists, on what to expect on a scientific dive even before they go near a body of water.

Done in conjunction with DHI Water and Environment, Hiverlab's Eyes on Habitat: Coral Reefs VR is a half-hour-long VR training programme touching on topics such as reef conservation and monitoring.

An increasing number of organisations across diverse sectors are exploring use of VR for a variety of business applications, such as design, data visualisation, collaboration and training and, most importantly, for marketing, advertisements and sales.

MR AVINAV TRIGUNAIT, IDC analyst and associate research director, on the growing trend in the use of VR in various industries.

Members of the public can experience the dive for themselves next month, when the prototype is available at the Infocomm Media Development Authority's Pixel Labs, which is located at the Jurong National Library and the National Design Centre.

VR is also changing the way sales are done. At local furniture-design company Commune's experience centre in Defu Lane, shoppers load their floor plans and don VR goggles to see how Commune's furniture, wall colours and flooring will look in a virtual home.

Hiverlab's founder Ender Jiang said recreating the training process in VR makes it more convenient for teaching, as instructors can teach more students at one go.

As many as 30 trainee "divers" can join the simulation and follow an instructor along the dive. The instructor can also pause the simulation at any time to point out interesting types of corals and explain what to look out for, as well as quiz the divers on identifying different coral species.

Dr Siti Maryam Yaakub, a senior marine ecologist from DHI, said: "Having trained new divers myself, I found that most of them dive in and are quite unprepared for what comes next, because scientific diving with the specific purpose of collecting data is actually quite different from leisure diving.

"So having a programme like this where you can run through it first and visualise it using VR technology is a great way to get their feet wet, figuratively.

Commune's director, Mr Joshua Koh, said VR is part of the company's plan to reinvent its furniture retailing business and to give its customers a more innovative shopping experience.

"We have plans to further implement the system across all our shops and believe it will help to drive sales," he said.

THE RISE OF ENTERPRISE VR

Consumer VR was one of the leading tech trends last year, when mass-market VR headsets aimed primarily at entertainment and gaming like the Sony PlayStation VR and HTC's Vive were launched for consumers here.

But the availability of hardware and software products, as well as growing consumer awareness, has also provided the much-needed thrust for the enterprise adoption of VR technologies.

"An increasing number of organisations across diverse sectors are exploring use of VR for a variety of business applications, such as design, data visualisation, collaboration and training and, most importantly, for marketing, advertisements and sales," said IDC analyst and associate research director Avinav Trigunait.

For instance, VR is also a growing trend in the travel and tourism industry, with airlines using the technology to market their flights and destinations.

One reason why VR has started becoming a viable commercial technology, instead of a clunky gimmick, is due to the advancement of other technologies which have made it easier for humans to interact with computers.

"The use of cognitive technologies such as gesture recognition, visual recognition and voice recognition will greatly impact the advancement and utility of VR," said IDC's Mr Trigunait.

Three out of 10 of consumer-facing Fortune 5000 companies will experiment with VR as part of their marketing efforts this year, according to an IDC prediction report.

Its chief business officer, Mr Irwin Luo, said they have received more requests from marketing agencies over the last year for branding and outreach.

The company is now working with government agencies to produce VR content for specific training scenarios in niche cases, which help drive manpower and training costs down as travel and logistics costs are reduced.

Sent from my iPad(Air)
Posted by ChangCL's Site at 1:56 AM